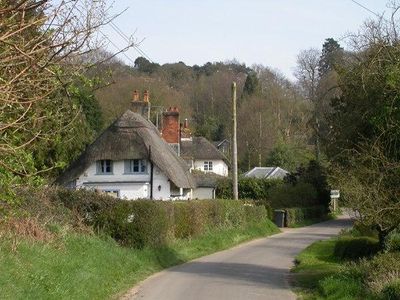 Chilworth is a village in Hampshire, UK, very close to the city of Southampton. Good travel connections and restricted development have led to the village becoming particularly affluent. The village was referred to as Celeworda in the Domesday book, and is now in two parts: modern Chilworth lying along the straight 'new' stretch of the Southampton to Romsey road, and old Chilworth built around the 'old' road.
Chilworth Old Village, at the west end, consists of former farm workers' thatched cottages interspersed with modern houses and bungalows built in the 1950s. The Anglican Church of St Denys, which lies on the edge of the Old Village, was rebuilt in 1812 and is noted for its old bells which date from about the year 1200. Chilworth Old Village was designated a conservation area on 1 November 1989. Most of the buildings from the 16th century are situated in the Chilworth Old Village Conservation Area. The exceptions are Manor Farm and the Beehives, the latter of which are the lodges to Chilworth Manor Hotel.