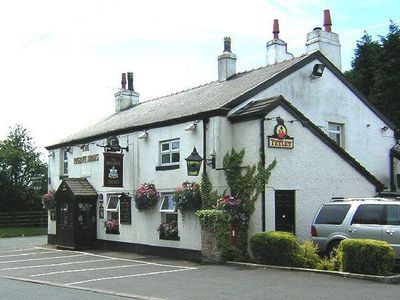 Wrightington is a civil parish in West Lancashire, England, with an area of 3,915½ acres. The surface is hilly, rising to over 400 ft. at Harrock on the border of Parbold, and then falling to the north, northeast and southeast. On the southern border, the boundary at Appley Bridge touches the River Douglas. Wrightington Hall is to the north of this point. Tunley and Broadhurst lie to the north of the park, and Fairhurst, to the west of Harrock, reaches down to the River Douglas. At the 2001 census, Wrightington had a population of 4,055, falling to 2,886 at the 2011 Census.
Boar's Den, thought to be a Bronze Age round barrow, is relatively undisturbed and consists of an earth and stone mound 73 yards by 68 yards with a maximum height of 8 feet that suffered some plough damage in the past and is now used only as grazing land. If this round barrow were not marked on a map, despite being fairly extensive, it might be missed on the ground, mistaken as a natural lump in the middle of the field.