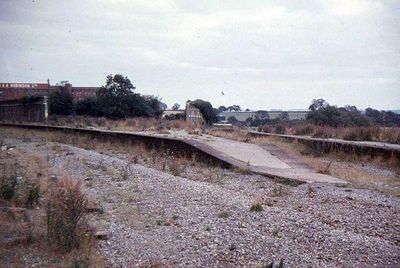 Mangotsfield railway station was a railway station on the Midland Railway route between Bristol and Birmingham, 5.1 miles north-east of Bristol Temple Meads and 82 miles from Birmingham New Street, serving what is now the Bristol suburb of Mangotsfield. The station was opened in 1845 by the Bristol and Gloucester Railway, but had very little in the way of passenger amenities. The station was resited in 1869 to serve the new Mangotsfield and Bath Branch Line, and became an important junction station with extensive facilities and six platforms. Passenger footfall however failed to match the station's size, though at its peak eight staff were employed. The station closed in 1966 when services to Bath ended as part of the Beeching cuts, and the line through the station closed in 1969. The railway became a cycle path in the 1980s, and is a popular resting point on the route as several of the station's walls and platforms are still in situ.