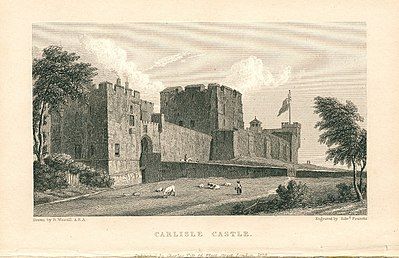 Carlisle Castle is in Carlisle, in the English county of Cumbria, near the ruins of Hadrian's Wall. The castle is over 900 years old and has been the scene of many historical episodes in British history. Given the proximity of Carlisle to the border between England and Scotland, it has been the centre of many wars and invasions. During the Jacobite Rising of 1745–6, Carlisle became the last English fortress to undergo a siege. The castle was listed as a Scheduled Ancient Monument on 7 August 1996.