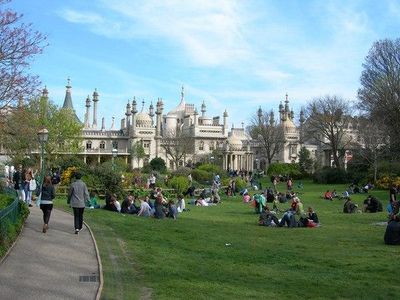 The Royal Pavilion, also known as the Brighton Pavilion, is a Grade I listed former royal residence located in Brighton, England. Beginning in 1787, it was built in three stages as a seaside retreat for George, Prince of Wales, who became the Prince Regent in 1811. It is built in the Indo-Saracenic style prevalent in India for most of the 19th century. The current appearance of the Pavilion, with its domes and minarets, is the work of architect John Nash, who extended the building starting in 1815.
The Prince of Wales, who later became George IV, first visited Brighton in 1783, at the age of 21. The seaside town had become fashionable as a result of the residence of George's uncle, Prince Henry, Duke of Cumberland, whose tastes for fine cuisine, gambling, the theatre, and general fast living the young prince shared, and with whom he lodged in Brighton at Grove House. In addition, the Prince of Wales was advised by his physician that the seawater and fresh air would be beneficial for his gout. In 1786, under a financial cloud with investigation by Parliament for the extravagances incurred in building Carlton House, London, the Prince rented a modest, erstwhile farmhouse facing the Old Steine, a grassy area of Brighton used as a promenade by visitors. Remote from the Royal Court in London, the Pavilion was a discreet location for the Prince to enjoy private liaisons with his long-time companion, Maria Fitzherbert. The Prince had wished to marry her, and did so in secrecy as her Roman Catholic religion prohibited his marrying her under the Royal Marriages Act 1772.