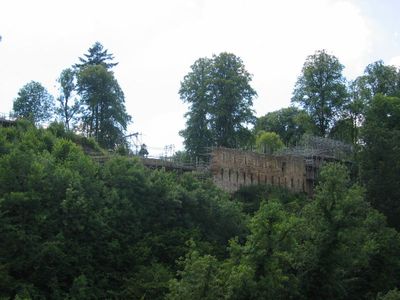 Cadzow Castle, now in ruins, was constructed between 1500 and 1550 at a site one mile south-east of the centre of Hamilton, South Lanarkshire, Scotland. The earlier medieval settlement of Hamilton was formerly known as Cadzow or Cadyou , until it was renamed in 1455 in honour of James Hamilton, 1st Lord Hamilton. The castle sits above a gorge overlooking the Avon Water in what is now Chatelherault Country Park, but was previously the hunting and pleasure grounds of the Duke of Hamilton's estate of Hamilton Palace - this area being known as Hamilton High Parks. The ruin is a Scheduled Ancient Monument.
The ancient kings of Strathclyde are believed to have had a hunting lodge at Cadzow, prior to that kingdom's assimilation into Scotland in the 12th century. The original Cadzow Castle is believed to have been built in the 12th century on an earlier high status site, as an occasional royal residence for King David I . Royal charters of David's reign were issued from here as early as 1139. His successors Alexander II, Alexander III and others down to Robert the Bruce also used the castle, it is believed primarily as a hunting lodge due to the close proximity of the forested parkland, itself part of the once more extensive royal forest of the Clyde Valley. Archaeologists favour the site of Hamilton Motte adjacent to the original settlement and religious foundation, and known latterly as Hamilton Motte. It is possible that the earlier Cadzow Castle was on an alternative site at NS729548, now known as Castlehill, although the area is now a housing estate, and the site is some distance from the settlement of Cadzow, and of dubious topographical prospects for such a fortification.