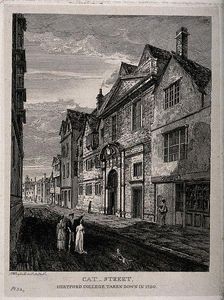 Source: Etching by J. Whessall after himself

Hertford College is a constituent college of the University of Oxford in England. It is located on Catte Street in the centre of Oxford, directly opposite the main gate to the Bodleian Library. The college is known for its iconic bridge, the Bridge of Sighs. There are around 600 students at the college at any one time, comprising undergraduates, graduates and visiting students from overseas.

The first Hertford College began in the 1280s as Hart Hall and became a college in 1740 but was dissolved in 1816. In 1820, the site was taken over by Magdalen Hall, which had emerged around 1490 on a site adjacent to Magdalen College. In 1874, Magdalen Hall was incorporated as a college, reviving the name Hertford College. In 1974, Hertford was part of the first group of all-male Oxford colleges to admit women.