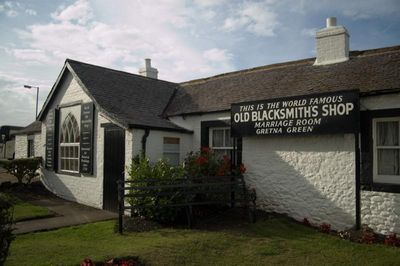 Gretna Green is famous for runaway weddings. It was historically the first village in Scotland, following the old coaching route from London to Edinburgh. As one of the world's most popular wedding destinations, Gretna Green is hosting over 5000 weddings each year, and one of every six Scottish weddings. Gretna's famous "runaway marriages" began in 1753 when Lord Hardwicke's Marriage Act, was passed in England; it stated that if both parties to a marriage were not at least 21 years old, then parents had to consent to the marriage. This Act did not apply in Scotland.