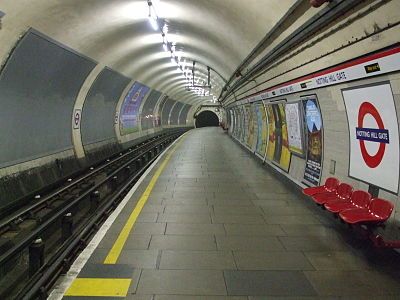 Notting Hill Gate is a London Underground station in the street known as Notting Hill Gate. On the Central line, it is between Holland Park to the west and Queensway to the east. On the District line and Circle line it is between High Street Kensington and Bayswater stations. It is on the boundary of Travelcard Zone 1 and Zone 2.
The sub-surface Circle and District line platforms were opened on 1 October 1868 by the Metropolitan Railway as part of its extension from Paddington to Gloucester Road. The Central line platforms were opened on 30 July 1900 by the Central London Railway . Entrances to the two sets of platforms were originally via separate station buildings on opposite sides of the road and access to the CLR platforms was originally via lifts.