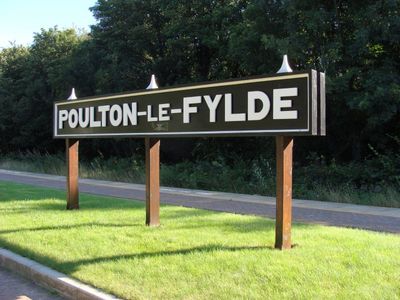 Poulton-le-Fylde railway station serves the town of Poulton-le-Fylde in Lancashire, England. It is managed by Northern Trains, but also served by Avanti West Coast and is 14 1⁄4 miles northwest of Preston.

The original station was about 400 yards north-east of the current location, at "The Breck". The railway to the fishing town of Fleetwood passed along a straight line east of the town. From 1846, there was a junction to Blackpool just north of the station, with tight connecting curves facing either way. In 1893 a fatal accident occurred when a train took the curve too fast. Subsequently, in 1896, the tracks were realigned to follow a much gentler westward curve to Blackpool, with the new station halfway along the curve. The Fleetwood branch then curved to the east to rejoin the original alignment. The old station continued to be used as a goods station until 1968.