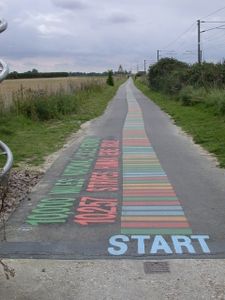 Addenbrooke's Hospital is the start of a peculiar cycling path. The path runs from Addenbrooke’s Hospital to Great Shelford and is decorated with 10,257 colourful stripes which represent the four nucleotides of the BRCA2 gene. This way, Cambridge, a city known for its abundant bicycles and cutting edge scientific research, found a way to combine these two things… In 2005, as a celebration of the 10,000th mile of the national cycle network, Cambridgeshire County Council and Sustrans joined forces with the Wellcome Trust Sanger Institute to create a DNA-inspired cycle path.