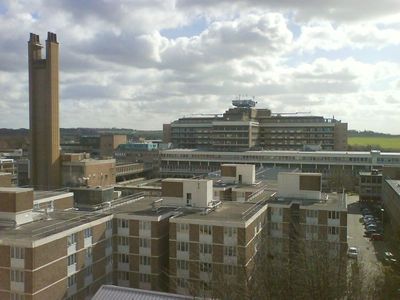 Addenbrooke's Hospital is an internationally renowned teaching hospital and research centre in Cambridge, England, with strong affiliations to the University of Cambridge. Addenbrooke's Hospital is based on the Cambridge Biomedical Campus. The hospital is run by Cambridge University Hospitals NHS Foundation Trust and is a designated academic health science centre. It is also the East of England's major trauma centre - the first of which to be operational in the UK.
The hospital was founded in 1766 on Trumpington Street with £4,500 from the will of Dr John Addenbrooke, a fellow of St Catharine's College. In 1962 the first building was opened on its present site, on the southern edge of the city at the end of Hills Road. The last patient left the old site in 1984 - the old site is now occupied by the Cambridge Judge Business School, as well as Browns Brasserie & Bar. A new elective care facility was procured under a Private Finance Initiative contract in 2004, It was built by Alfred McAlpine and designed by Llewelyn Davies Architects at a cost of £85 million and completed in spring 2007.