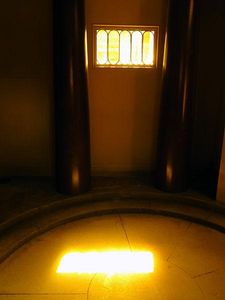 Dulwich Picture Gallery is an art gallery in Dulwich, South London, which opened to the public in 1817. It was designed by Regency architect Sir John Soane using an innovative and influential method of illumination. Dulwich is the oldest public art gallery in England and was made an independent charitable trust in 1994. Until this time the gallery was part of Edward Alleyn's College of God's Gift, a charitable foundation established by the actor, entrepreneur, and philanthropist Edward Alleyn in the early-17th century. The acquisition of artworks by its founders and bequests from its many patrons resulted in Dulwich Picture Gallery housing one of the country's finest collections of Old Masters, especially rich in French, Italian, and Spanish Baroque paintings, and in British portraits from Tudor times to the 19th century.

The Dulwich Picture Gallery and its mausoleum are listed Grade II* on the National Heritage List for England.