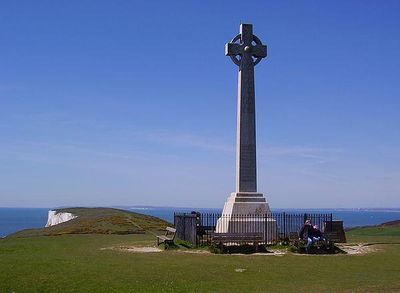 Tennyson Down is a hill at the west end of the Isle of Wight just south of Totland. Tennyson Down is a grassy, whale-backed ridge of chalk which rises to 482 ft/147m above sea level. Tennyson Down is named after the poet Lord Tennyson who lived at nearby Farringford House for nearly 40 years. The poet used to walk on the down almost every day, saying that the air was worth 'sixpence a pint'.

It is part of the chalk ridge that forms the backbone of the Isle of Wight, this ridge extends to the west for 3 miles where it ends with The Needles. To the east the hill descends gently down to Freshwater Bay where the sea has cut through the ridge. To the south is Highdown Cliffs, a near vertical chalk cliff drop of over 100 metres to the sea below.