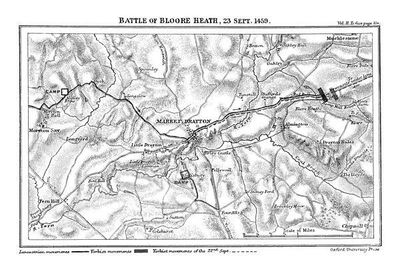 After the First Battle of St Albans in 1455, an uneasy peace held in England. Attempts at reconciliation between the houses of Lancaster and York enjoyed but marginal success. However, both sides became increasingly wary of each other and by 1459 were actively recruiting armed supporters. Queen Margaret of Anjou continued to raise support for King Henry VI amongst noblemen, distributing an emblem of a silver swan to knights and squires enlisted by her personally, whilst the Yorkist command under the Duke of York was finding plenty of anti-royal support despite the severe punishment for raising arms against the king.