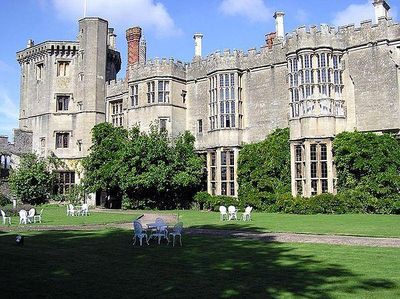 Thornbury Castle is a Tudor castle in the parish of Thornbury, in Gloucestershire, England, situated next to the parish church of St Mary, founded in the Norman era. Construction was begun in 1511 as a further residence for Edward Stafford, 3rd Duke of Buckingham , of Stafford Castle in Staffordshire. It is not a true military fortress but rather an early example of a Tudor country house, with minimal defensive attributes. It is now a grade I listed building.

The site was occupied by a manor house in 930; Jasper Tudor, Duke of Bedford & Earl of Pembroke, died in the Manor House in 1495. Part of the original plans for a very grand residence were "well advanced" before the 3rd Duke of Buckingham was beheaded for treason in 1521, by order of King Henry VIII. As at Richmond Palace in Surrey, the main ranges of Thornbury framed courts, of which the symmetrical entrance range, with central gatehouse and octagonal corner towers, survives, together with two less regular side ranges with many irregular projecting features and towers.