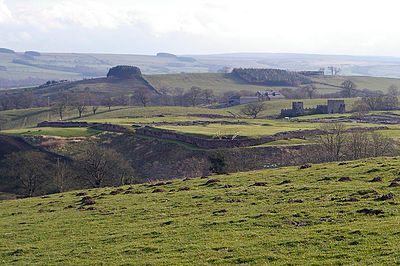 Vindolanda was a Roman auxiliary fort just south of Hadrian's Wall in northern England. Archaeological excavations of the site show it was under Roman occupation from roughly 85 AD to 370 AD. Located near the modern village of Bardon Mill, it guarded the Stanegate, the Roman road from the River Tyne to the Solway Firth. It is noted for the Vindolanda tablets, a set of wooden leaf-tablets that were, at the time of it's discovery, the oldest surviving handwritten documents in Britain.
The first post-Roman record of the ruins at Vindolanda was made by the antiquarian William Camden, in his Britannia . Occasional travellers reached the site over the next two hundred years, and the accounts they left predate much of the stone-stealing that has damaged the site. The military bath-house was still partly roofed when Christopher Hunter visited the site in 1702. In about 1715 an excise officer named John Warburton found an altar there, which he removed. In 1814 the first real archaeological work was begun, by the Rev. Anthony Hedley. Hedley died in 1835, before writing up his discoveries. Little more was done for a long time, although in 1914 a workman found another altar at the site, set up by the civilians living at the fort in honour of the Divine House and Vulcan. Several names for the site are used in the early records, including "Chesters on Caudley", "Little Chesters", "The Bower", and "Chesterholm"; the altar found in 1914 confirmed that the Roman name for the site was "Vindolanda", which had been in dispute as one early source referred to it as "Vindolana".