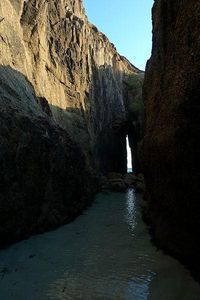 Nanjizal is a beach and cove in the civil parish of Sennen, Cornwall, England, United Kingdom. Situated one mile to the south-east of Land's End, Nanjizal has no direct access via road and is usually reached via the South West Coast Path from Land's End in the north, or from Porthgwarra to the south. Nanjizal is also a noted bird watching location.
Nanjizal is a cove and valley facing west into the Atlantic Ocean. It is bounded on the north side by the headland of Carn Boel and Trevilley Cliff and to the south is the headland of Carn Lés Boel and Higher Bosistow Cliff. Depending on tides and storms the beach can vary from sand to boulders. On the south is the 'Song of the Sea' , an arch where the sea has worn through a tall narrow passageway. Inside the cove are large rockpools with many types of sea anemones and seaweeds. To the north is a distinctive rock close to the cliff known as the 'Diamond Horse'. There are also a number of other caves further round the beach.