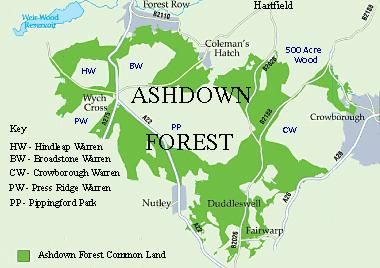 Ashdown Forest is an ancient area of tranquil open heathland occupying the highest sandy ridge-top of the High Weald Area of Outstanding Natural Beauty. It is situated some 30 miles south of London in the county of Sussex, England. Rising to an elevation
of 732 feet above sea level, its heights provide expansive vistas across the heavily wooded hills of the Weald to the chalk escarpments of the North Downs and South Downs on the horizon.

Ashdown Forest's origins lie as a medieval hunting forest created soon after the Norman conquest of England. By 1283 the forest was fenced in by a 23 miles pale enclosing an area of some 20 square miles . 34 gates and hatches in the pale, still remembered in place names such as Chuck Hatch and Chelwood Gate, allowed local people to enter to graze their livestock, collect firewood and cut heather and bracken for animal bedding. The forest continued to be used by the monarchy and nobility for hunting into Tudor times, including notably Henry VIII, who had a hunting lodge at Bolebroke Castle, Hartfield and who courted Anne Boleyn at nearby Hever Castle.