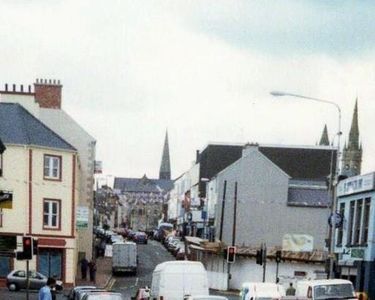 The Omagh bombing was a car bombing on 15 August 1998 in the town of Omagh, County Tyrone, Northern Ireland. It was carried out by a group calling themselves the Real Irish Republican Army, a Provisional Irish Republican Army splinter group who opposed the IRA's ceasefire and the Good Friday Agreement. The bombing killed 29 people and injured some 220 others, making it the deadliest single incident of the Troubles in Northern Ireland. Telephoned warnings had been sent almost 40 minutes beforehand but were inaccurate, and police had inadvertently moved people toward the bomb.
The bombing caused outrage both locally and internationally, spurred on the Northern Ireland peace process and dealt a severe blow to the dissident Irish republican campaign. The Real IRA denied that the bomb was intended to kill civilians and apologised; shortly after, the group declared a ceasefire. The victims included people of many backgrounds and ages: Protestants, Catholics, six teenagers, six children, a woman pregnant with twins, two Spanish tourists and others on a day trip from the Republic of Ireland. Both unionists and Irish nationalists were killed and injured. As a result of the bombing, new anti-terrorism laws were swiftly enacted by both the United Kingdom and Republic of Ireland.