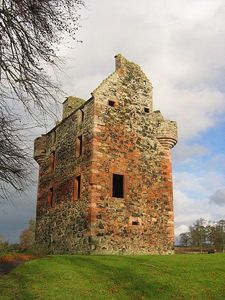 Greenknowe Tower is a 16th-century tower house, located just west of the village of Gordon, in the Scottish Borders. Although a roofless ruin, the stonework of the tower is well preserved, and represents a fine example of a later tower house, built more as a residence rather than as a place of defence. The building is located at NT639428, beside the A6105 road. It is a Scheduled Ancient Monument, and is in the care of Historic Scotland.

The lands of Greenknowe were obtained by the Setons of Touch in the early 15th century, when Alexander Seton married a Gordon heiress. The tower was built in 1581 by James Seton, and the date, his initials, and the initials of his wife Janet Edmonstone, are inscribed above the door. The castle is situated on a low natural mound, which was originally surrounded and defended by marshy ground.