RouteYou » Wikipedia » Places of interest » St Andrew's in the Square 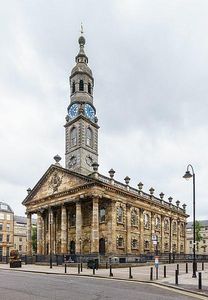 St Andrew's in the Square is an 18th-century category-A-listed former church in Glasgow, Scotland, considered one of the finest classical churches in Scotland, and now Glasgow's Centre for Scottish Culture, promoting Scottish music, song and dance. The church is in St Andrew's Square, near Glasgow Cross and Glasgow Green, on the edge of the City's East End.

The church, inspired by St Martin-in-the-Fields in London, was built between 1739 and 1756 by Master Mason Mungo Naismith, and designed by Allan Dreghorn. While construction of it was started before the nearby St. Andrew's-by-the-Green, it was completed after, making it either the third or fourth oldest church in Glasgow, depending on criterion. The earlier two buildings were Glasgow Cathedral and the Trongate steeple. It was the first Presbyterian church built after the Reformation, and was commissioned by the city's Tobacco Lords as a demonstration of their wealth and power.