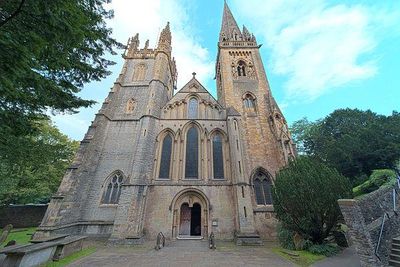 Llandaff Cathedral is an Anglican cathedral and parish church in Llandaff, Cardiff, Wales. It is the seat of the Bishop of Llandaff, head of the Church in Wales Diocese of Llandaff. It is dedicated to Saint Peter and Saint Paul, and three Welsh saints: Dubricius , Teilo and Oudoceus . It is one of two cathedrals in Cardiff, the other being the Roman Catholic Cardiff Metropolitan Cathedral in the city centre.

The current building was constructed in the 12th century on the site of an earlier church. Severe damage was done to the church in 1400 during the rebellion of Owain Glyndŵr, during the English Civil War when it was overrun by Parliamentarian troops, and during the Great Storm of 1703. By 1717, the damage to the cathedral was so extensive that the church seriously considered the removal of the see. Following further storms in the early 1720s, construction of a new cathedral began in 1734, designed by John Wood, the Elder. During the Cardiff Blitz of the Second World War in January 1941, the cathedral was severely damaged when a parachute mine was dropped; blowing the roof off the nave, south aisle and chapter house. The stonework which remains from the medieval period is primarily Somerset Dundry stone, though local blue lias constitutes most of the stonework done in the post-Reformation period. The work done on the church since World War II is primarily concrete and Pennant sandstone, and the roofs, of Welsh slate and lead, were added during the post-war rebuilding. In February 2007, the organ was damaged during a severe lightning strike, prompting a fundraiser of £1.5 million to raise money for an entirely new organ.