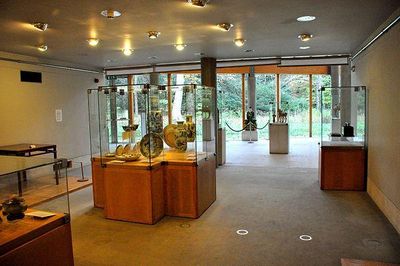 The Burrell Collection is an art collection in the city of Glasgow, Scotland. It is situated in Pollok Country Park on the south side of the city. The museum closed for refurbishment on 23 October 2016 and was due to reopen in 2020. However, Glasgow Life confirmed in July 2019 that it would be spring 2021 before the re-opening takes place
The eclectic collection was acquired over many years by Sir William Burrell, a wealthy Glaswegian shipping magnate and art collector, who then gave it to the city of Glasgow Corporation in 1944. The gift was made on the condition that the collection was to be housed in a building 16 miles from the centre of Glasgow, to show the works to their greatest advantage, and to avoid the damaging effects of air pollution at the time. The trustees spent over 20 years trying to find a suitable 'home' for the collection, one which met all the criteria set out in the Trust Deed, without success. Eventually, when the Pollok Estate was given to the city in 1967, the Trustees had certain terms of the deed waived, which allowed the current site, 3 miles from the city centre and within the city boundaries, to be chosen for the collection.