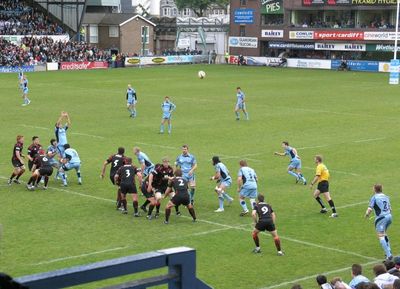 Cardiff Arms Park , also known as The Arms Park, is situated in the centre of Cardiff, Wales. It is primarily known as a rugby union stadium, but it also has a bowling green. The Arms Park was host to the British Empire and Commonwealth Games in 1958, and hosted four games in the 1991 Rugby World Cup, including the third-place play-off. The Arms Park also hosted the inaugural Heineken Cup Final of 1995–96 and the following year in 1996–97.

The history of the rugby ground begins with the first stands appearing for spectators in the ground in 1881–1882. Originally the Arms Park had a cricket ground to the north and a rugby union stadium to the south. By 1969, the cricket ground had been demolished to make way for the present day rugby ground to the north and a second rugby stadium to the south, called the National Stadium. The National Stadium, which was used by Wales national rugby union team, was officially opened on 7 April 1984, however in 1997 it was demolished to make way for the Millennium Stadium in 1999, which hosted the 1999 Rugby World Cup and became the national stadium of Wales. The rugby ground has remained the home of the semi-professional Cardiff RFC yet the professional Cardiff Blues regional rugby union team moved to the Cardiff City Stadium in 2009, but returned three years later.