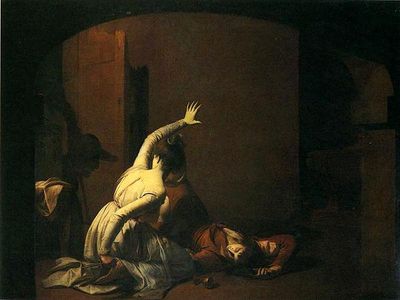 Derby Museum and Art Gallery was established in 1879 in Derby, England, along with Derby Central Library, in a new building designed by Richard Knill Freeman and given to Derby by Michael Thomas Bass. The collection includes a gallery displaying many paintings by Joseph Wright of Derby; there is also a large display of Royal Crown Derby and other porcelain from Derby and the surrounding area. Further displays include archaeology, natural history, geology, military collections and world cultures. The Art Gallery was opened in 1882.

The museum can trace its start to the formation of the Derby Town and County Museum and Natural History Society on 10 February 1836. The society was housed by Full Street Public Baths but it was a private society funded by its members' subscriptions. Its collections were created by donations initially from Dr Forrester who had been a President of Derby Philosophical Society. The patron of the Museum Society was William Cavendish, 6th Duke of Devonshire, and the President was Sir George Crewe who was a keen naturalist. Col. George Gawler contributed a collection of minerals and exotic stuffed birds which included an albatross from his time as governor in South Australia. In 1839 a major exhibition was held at the Mechanics' Institute which contained many items including those from Joseph Strutt's collection. Many of these made their way into Derby Museum's collection. The society moved in 1840 to the Athenaeum in Victoria Street. The society's collections grew in 1856 and they were first offered for incorporation into the town by William Mundy, but the offer was rejected.