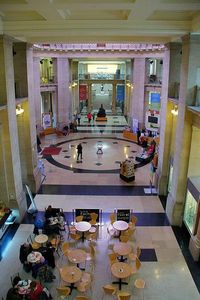 National Museum Cardiff is a museum and art gallery in Cardiff, Wales. The museum is part of the wider network of Amgueddfa Cymru – National Museum Wales. Entry is kept free by a grant from the Welsh Government; however, they do ask for donations throughout the museum.
The National Museum of Wales was found in 1905, with its royal charter granted in 1907. Part of the bid for Cardiff to obtain the National Museum for Wales included the gift of the Cardiff Museum Collection, then known as "Welsh Museum of Natural History, Archaeology and Art," which was formally handed over in 1912. The Cardiff Museum was sharing the building of Cardiff Library, and was a sub-department of the library until 1893. Construction of a new building in the civic complex of Cathays Park began in 1912, but owing to the First World War it did not open to the public until 1922, with the official opening taking place in 1927. The architects were Arnold Dunbar Smith and Cecil Brewer, although the building as it now stands is a heavily truncated version of their design.