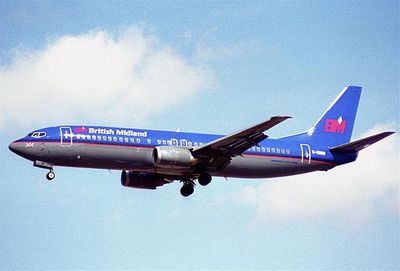 The Kegworth air disaster occurred when British Midland Flight 92, a Boeing 737-400, crashed onto the motorway embankment between the M1 motorway and A453 road near Kegworth, Leicestershire, England, while attempting to make an emergency landing at East Midlands Airport on 8 January 1989.
The aircraft was on a scheduled flight from London Heathrow Airport to Belfast International Airport when a fan-blade broke in the left engine, disrupting the air conditioning and filling the cabin with smoke. The pilots believed this indicated a fault in the right engine, since earlier models of the 737 ventilated the cabin from the right, and they were unaware that the -400 used a different system. The pilots mistakenly shut down the functioning engine. They selected full thrust from the malfunctioning one and this increased its fuel supply, causing it to catch fire. Of the 126 people aboard, 47 died and 74 sustained serious injuries.