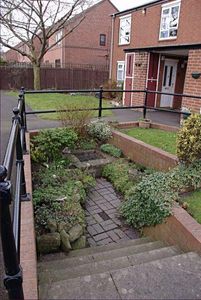 Derventio or Derventio Coritanorum was a small town in the Roman province of Britannia. Today it is known as Little Chester, on the outskirts of Derby, located in the English county of Derbyshire.
The first Roman fort in the area was built on the opposite bank of the River Derwent at Strutts Park. It was replaced about AD 80 by a fort on the present site, but this only lasted about forty years, then was decommissioned. There was extensive Roman activity prompted by the fort, which was connected westward by a road to the Icknield Street, and to the east by a road to Sawley on the River Trent. A fort-vicus which manufactured pottery and did ironworking was founded 600m to the east on the Sawley Road. The fort was later re-occupied and re-used for a further twenty five years. The defensive bank and timber palisade were now remodelled and stone gates built. Then it lay unoccupied until the late 3rd century when a stone wall was built around the town. It did not outlive the end of the 4th century.