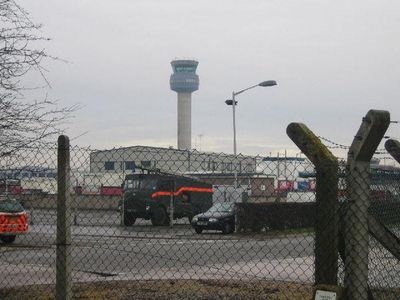 East Midlands Airport is an international airport in the East Midlands of England, close to Castle Donington in northwestern Leicestershire, between Loughborough ), Derby ) and Nottingham ); Leicester is ) to the south and Lincoln ) north east. It serves the whole East Midlands region of Leicestershire, Nottinghamshire, Lincolnshire, Northamptonshire and Derbyshire. The airfield was originally built as a Royal Air Force station known as RAF Castle Donington in 1943, before being redeveloped as a civilian airport in 1965.

East Midlands Airport has established itself as a hub for low-fare airlines such as Jet2.com and Ryanair and tour operators like TUI Airways, which serve a range of domestic and European short-haul destinations. It is also a base for Loganair. Passenger numbers peaked in 2008 at 5.6 million but had declined to around 4.5 million in 2015, making it the 11th-busiest airport in the UK by passenger traffic. A major air cargo hub, it was the second-busiest UK airport for freight traffic in 2016, after London Heathrow.