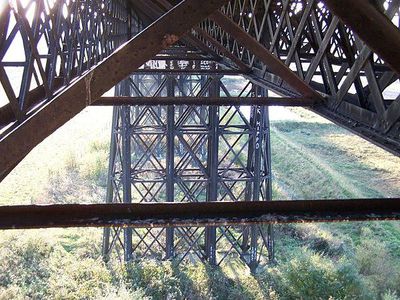 Bennerley Viaduct is a disused railway viaduct spanning the Erewash Valley between Awsworth and Ilkeston in central England. Restoration work to create a public walkway scheduled to start from March 2020 was quickly suspended due to industry lockdown caused by the COVID-19 pandemic. Bennerley was built in 1877 but closed to rail traffic in 1968, as part of the Beeching cuts. It was sold to conservation group Railway Paths Ltd in 1998.
The viaduct is a Grade II* listed structure, and is on the Heritage at risk register published by Historic England. It was also included into the 2020 World Monuments Watch. Small stages of restoration started in mid 2014. Planned improvements include new decking to join into a network of existing public paths, subject to planning consents for the required works and access construction.