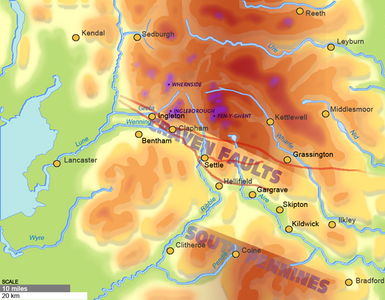 Aire Gap is a pass through the Pennines in England formed by geologic faults and carved out by glaciers. The term is used to describe a geological division, a travel route, or a location that is an entry into the Aire river valley.

Geologically the Aire Gap lies between the Craven Fault and the limestone uplands of the Yorkshire Dales to the north and the Forest of Bowland and the millstone grit moors of the South Pennines. The South Pennines is the system between the Aire Gap and the Peak District.
The gap was formed by the dropping of the Craven Faults in the Carboniferous through Jurassic periods combined with glacial scouring by ice sheets in the Pleistocene Ice Age.
The Aire Gap splits the Pennines into north and south by allying with the River Ribble. The Pennine chain is divided into two sections by the Aire Gap formed by the River Aire flowing south, a member of the Humber basin, and the Ribble flowing west and entering the Irish sea.