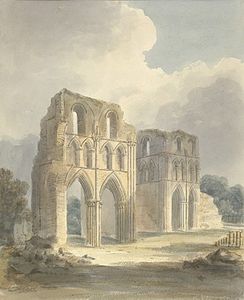 Roche Abbey is a now-ruined abbey in the fields in the south of the civil parish of Maltby, South Yorkshire, England. It is in a headwater valley and King's Wood, which is, equally, owned by architectural preservation charity English Heritage.
The abbey was founded in 1147 when the stone buildings were raised on the north side of the beck. The co-founders of Roche were Richard de Busli, likely the great-nephew of the first Roger de Busli, the Norman magnate builder of Tickhill Castle, and Richard FitzTurgis. When the monks first arrived in South Yorkshire from Newminster Abbey in Northumberland, they chose the most suitable side of the stream that runs through the valley, on which to build their new Cistercian monastery. Twenty-five years later, at the end of the century, the Norman Gothic great church had been finished, as well as most of the other buildings. The control of the abbey was vested in the de Vesci family, lords of Rotherham, who in turn subfeuded the land to Richard FitzTurgis, lord of Wickersley .