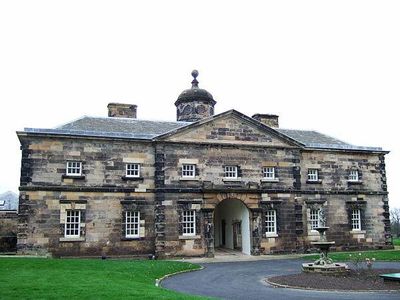 Lathom House was a large country house in the parish of Lathom in Lancashire, England. Built between 1725 and 1740, the main block was demolished in 1925.

A wooden castle is believed to have stood on the site in mediaeval times. Sir John I Stanley of the Isle of Man , Lord Lieutenant of Ireland and King of Mann married Isabel Latham, daughter and heiress of Sir Thomas Latham of Latham. The stone-built castle known as Lathom House, built by the Stanley family in 1496, had eighteen towers, and was surrounded by a wall six foot thick and a moat eight yards wide, its drawbridge defended by a gateway tower. In the centre of the site was a tall tower known as the Eagle Tower.