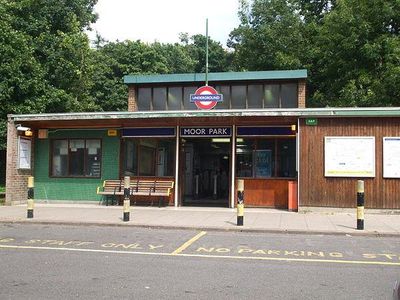 Moor Park is a London Underground station in the Three Rivers district of Hertfordshire, serving those living on the Moor Park estate, and also on the neighbouring Eastbury and South Oxhey estates. The station is outside the Greater London boundary but is in both Zone 6 and Zone 7, between the Metropolitan line stations of Rickmansworth, Croxley and Northwood.

The route extension from Pinner to Rickmansworth opened in 1887 by the Metropolitan Railway. Shortly after in 1899, Great Central Railway trains also passed here, following the Metropolitan via Verney Junction. Moor Park didn't open until 9 May 1910, and the station was called Sandy Lodge, after the Sandy Lodge Golf Course. It was renamed to Moor Park & Sandy Lodge in 1923 to reflect the area it was in. The lines were electrified in 1925 when the Watford branch was opened and electric-hauled trains passed to Rickmansworth to exchange the traction for steam. In 1950 the station was renamed to Moor Park and it was completely rebuilt in 1961, increasing the number of platforms to four: two for northbound trains and two for southbound trains to the city. British Rail and Network SouthEast trains stopped calling at Moor Park from 1993.