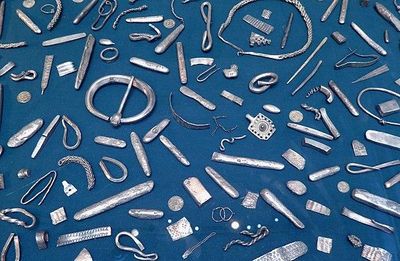 The Cuerdale Hoard is a hoard of more than 8,600 items, including silver coins, English and Carolingian jewellery, hacksilver and ingots. It was discovered on 15 May 1840 on the southern bank of a bend of the River Ribble, in an area called Cuerdale near Preston, Lancashire, England. The Cuerdale Hoard is one of the largest Viking silver hoards ever found, four times larger than its nearest rival in Britain or Ireland, according to Richard Hall. In weight and number of pieces, it is second only to the Spillings Hoard found on Gotland, Sweden.

The coins in the hoard are from three sources, represented in the proportions 5:1:1. Viking kingdoms of eastern England are represented in the largest portion; the other two portions are of Alfred's Kingdom of Wessex and of coins from foreign sources, which include Byzantine, Scandinavian, Islamic, Papal, North Italian and Carolingian mintings, many of the last from Aquitaine perhaps, Richard Hall suggests, acquired there in the Viking raids of 898.