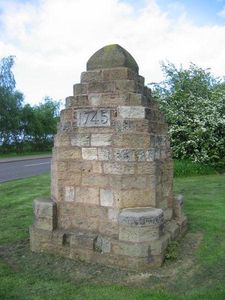 The Battle of Prestonpans, also known as the Battle of Gladsmuir, was fought on 21 September 1745, near Prestonpans, in East Lothian; it was the first significant engagement of the Jacobite rising of 1745, which is generally viewed as a subsidiary conflict of the War of the Austrian Succession.
Jacobite forces led by the Stuart exile Charles Edward Stuart defeated a government army under Sir John Cope, whose inexperienced troops broke in the face of a Highland charge. The battle lasted less than thirty minutes and was a huge boost to Jacobite morale. A heavily mythologised version of the story entered art and legend.