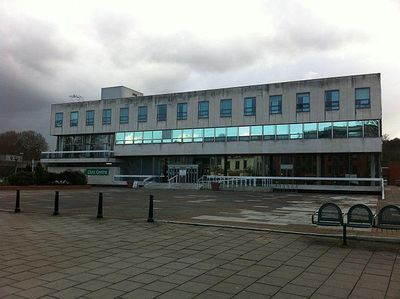 The Borough of Dacorum is a local government district in Hertfordshire, England that includes the towns of Hemel Hempstead, Berkhamsted, Tring and the western part of Kings Langley. The district, which was formed in 1974, had a population of 137,799 in 2001. Its name was taken from the old hundred of Dacorum which covered approximately the same area. It is the westernmost of Hertfordshire's districts, being bordered to the west by the Chiltern and Aylesbury Vale districts of Buckinghamshire.

The name Dacorum comes from Latin and it means "hundred of the Dacians". The latter word was used mistakenly in the Middle Ages for 'Danes'. This happened because of a legend asserting that certain tribes from Dacia had migrated to Denmark.
The hundred of Dacorum was first recorded in 1196, although it has existed since the 9th and 10th centuries, when it lay near the southern boundary of the Danelaw, on the River Lea. In 1086, the Domesday Book records the hundreds of Tring and Danais in places that became parts of the hundred of Dacorum.