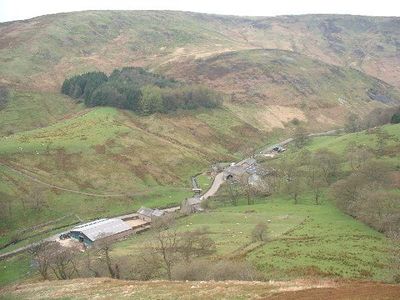 The Trough of Bowland is a valley and high pass in the Forest of Bowland Area of Outstanding Natural Beauty, Lancashire, England.

The pass, reaching 968 ft above sea level at the head of the valley, links to Wyresdale, dividing the upland core of Bowland into two main blocks. Though steep and narrow, the road is the most direct connection between Lancaster and Dunsop Bridge, and hence Clitheroe. It was the route taken by the "Pendle witches" to their trial at Lancaster Castle in 1612.
The Grey Stone of Trough, at the head of the pass, marks the line of the pre-1974 county boundary between Lancashire and the West Riding of Yorkshire. Historically, the Trough marked the westernmost boundary of the ancient Lordship of Bowland.