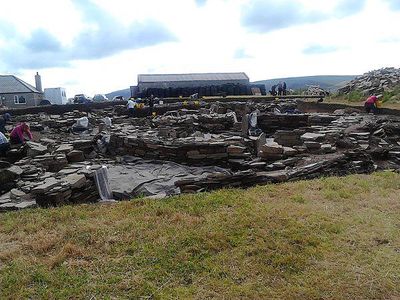 The Ness of Brodgar is an archaeological site covering 2.5 hectares between the Ring of Brodgar and the Stones of Stenness in the Heart of Neolithic Orkney World Heritage Site in Orkney, Scotland. Excavations at the site began in 2003. The site has provided evidence of decorated stone slabs, a stone wall 6 metres thick with foundations, and a large building described as a Neolithic temple. The earliest structures were built between 3,300 and 3,200 BC, and the site had been closed down and partly dismantled by 2,200 BC.
Today the Brodgar peninsula is a finger of land a few hundred metres wide, situated between the saltwater Loch of Stenness to the southwest and the freshwater Loch of Harray to the northeast.