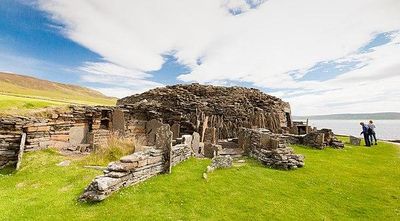 Midhowe Broch is an iron-age broch located on the west coast of the island of Rousay in the Orkney Islands, in Scotland.

Midhowe Broch is situated on a narrow promontory between two steep-sided creeks, on the north side of Eynhallow Sound. The broch is part of an ancient settlement, part of which has been lost to coastal erosion. The broch got its name from the fact that it's the middle of three similar structures that lie grouped within 500 metres of each other and Howe from the Old Norse word haugr meaning mound or barrow.