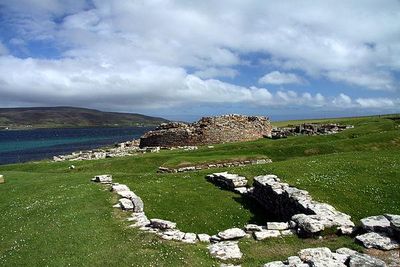 The Broch of Gurness is an Iron Age broch village on the northeast coast of Mainland Orkney in Scotland overlooking Eynhallow Sound, about 15 miles north-west of Kirkwall. It once housed a substantial community.

Settlement here began sometime between 500 and 200 BC. At the centre of the settlement is a stone tower or broch, which once probably reached a height of around 10 metres. Its interior is divided into sections by upright slabs. The tower features two skins of drystone walls, with stone-floored galleries in between. These are accessed by steps. Stone ledges suggest that there was once an upper storey with a timber floor. The roof would have been thatched, surrounded by a wall walk linked by stairs to the ground floor. The broch features two hearths and a subterranean stone cistern with steps leading down into it . It is thought to have some religious significance, relating to an Iron Age cult of the underground.