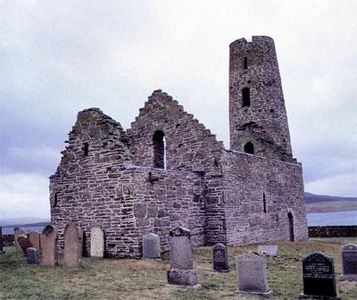 Egilsay is one of the Orkney Islands in Scotland, lying east of Rousay. The island is largely farmland and St Magnus Church, dedicated or re-dedicated to Saint Magnus, who was killed on the island in 1117 by an axe blow to the head. For hundreds of years the story of St. Magnus, part of the Orkneyinga saga, was considered just a legend until a skull with a large crack in it, such as it had been stricken by an axe, was found in the walls of St. Magnus Cathedral in Kirkwall.

Unusually for the Northern Isles, it has been suggested that Egilsay may have a partly Gaelic name. While at first sight, it appears to be Egil's island, "Egil" being a Norse personal name, the Gaelic eaglais meaning church, may be part of the root, as the island is dominated by a church of pre-Norse foundation. The island of Kili Holm just to the north, may represent cille, a monastic cell.