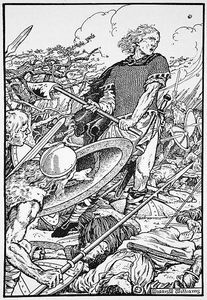 The Battle of Ashdown, was a West Saxon victory over a Danish Viking army on about 8 January 871. The location of Ashdown is not known, but may be Kingstanding Hill in Berkshire. The West Saxons were led by King Æthelred and his younger brother, the future King Alfred the Great, while the Viking commanders were Bagsecg and Halfdan. The battle is described in the Anglo-Saxon Chronicle and Asser's Life of King Alfred.
By 870, the Vikings had conquered two of the four Anglo-Saxon kingdoms, Northumbria and East Anglia. At the end of 870 they launched an attempt to conquer Wessex and marched from East Anglia to Reading, arriving on about 28 December. Three days after their arrival they sent out a large foraging party, which was defeated by an army of local levies under the command of Æthelwulf, Ealdorman of Berkshire, at the Battle of Englefield, but only four days later the main West Saxon army under Æthelred and Alfred was defeated at the Battle of Reading.