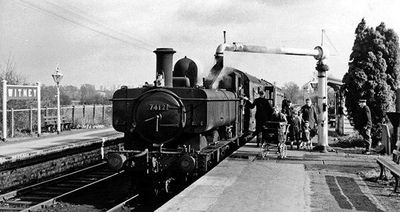 Witney railway station served the Oxfordshire town of Witney on the Oxford, Witney and Fairford Railway line. It consisted of two stone-built platforms, a station building, a signal box, and a shed in the form of a pagoda.

The first station in Witney was opened on 14 November 1861 as the terminus of the Witney Railway. When the East Gloucestershire Railway opened a 14-mile-10-chain extension of the line to Fairford on 14 January 1873, a new station was opened to the south of the first station. This was situated 200 yards to the east of Witney Goods Junction where the new line branched away from the Witney Railway just before the former terminus. Left on a short spur line, the old terminus was closed to passenger traffic, but remained in use as a goods station.