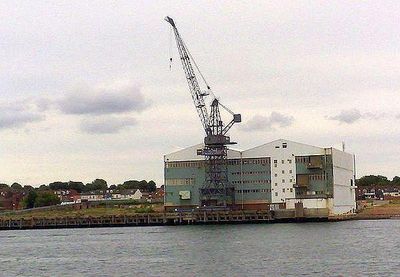 John I. Thornycroft & Company Limited, usually known simply as Thornycroft was a British shipbuilding firm founded by John Isaac Thornycroft in Chiswick in 1866. It moved to Woolston, Southampton, in 1908, merging in 1966 with Vosper & Company to form one organisation called Vosper Thornycroft. From 2002 to 2010 the company acquired several international and US based defence and services companies, and changed name to the VT Group. In 2010 the company was absorbed by Babcock International who retained the UK and international operations, but sold the US based operations to the American Jordan Company, who took the name VT Group.

John Isaac Thornycroft had shown shipbuilding ability when aged 16 he began building a small steam launch in 1859. The vessel was named Nautilus and in 1862 it proved to be the first steam launch with enough speed to follow the contenders in the University race. The ensuing publicity prompted his father, the sculptor Thomas Thornycroft, to purchase a strip of land along the Thames at Chiswick in 1864, and that became the start of John I. Thornycroft & Co.