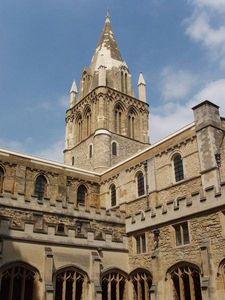 Christ Church Cathedral is the cathedral of the Anglican diocese of Oxford, which consists of the counties of Oxfordshire, Buckinghamshire and Berkshire. It is also the chapel of Christ Church at the University of Oxford. This dual role as cathedral and college chapel is unique in the Church of England.
The cathedral was originally the church of St Frideswide's Priory. The site was historically presumed to be the location of the nunnery founded by St Frideswide, the patron saint of Oxford, and the shrine now in the Latin Chapel, originally containing relics translated at the rebuilding in 1180, was the focus of pilgrimage from at least the 12th until the early 16th century.