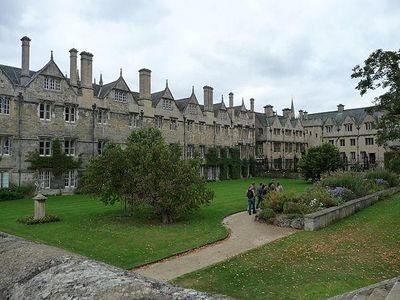 Merton College is one of the constituent colleges of the University of Oxford in England. Its foundation can be traced back to the 1260s when Walter de Merton, chancellor to Henry III and later to Edward I, first drew up statutes for an independent academic community and established endowments to support it. An important feature of Walter's foundation was that this "college" was to be self-governing and the endowments were directly vested in the Warden and Fellows.
By 1274, when Walter retired from royal service and made his final revisions to the college statutes, the community was consolidated at its present site in the south east corner of the city of Oxford, and a rapid programme of building commenced. The hall and the chapel and the rest of the front quad were complete before the end of the 13th century. Mob Quad, one of Merton's quadrangles, was constructed between 1288 and 1378, and is claimed to be the oldest quadrangle in Oxford, while Merton College Library, located in Mob Quad and dating from 1373, is the oldest continuously functioning library for university academics and students in the world.