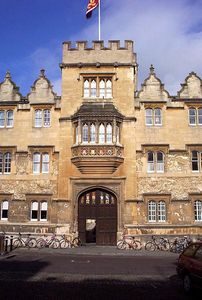 Oriel College is a constituent college of the University of Oxford in Oxford, England. Located in Oriel Square, the college has the distinction of being the oldest royal foundation in Oxford . In recognition of this royal connection, the college has also been known as King's College and King's Hall. The reigning monarch of the United Kingdom is the official Visitor of the College.
The original medieval foundation set up by Adam de Brome, under the patronage of Edward II, was called the House or Hall of the Blessed Mary at Oxford. The first design allowed for a Provost and ten Fellows, called 'scholars', and the College remained a small body of graduate Fellows until the 16th century, when it started to admit undergraduates. During the English Civil War, Oriel played host to high-ranking members of the King's Oxford Parliament.