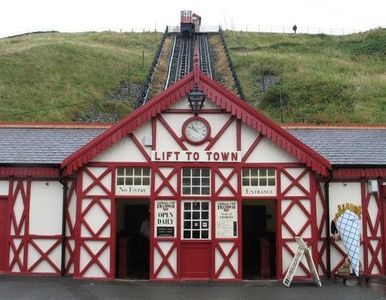 The Saltburn Cliff Lift is a funicular railway in Saltburn-by-the-Sea, Redcar and Cleveland in the ceremonial county of North Yorkshire, England. It provides access to Saltburn Pier and the seafront from the town. The cliff lift is the oldest operating water-balance cliff lift in the United Kingdom.
Saltburn Cliff Lift was constructed between 1883 and 1884 to replace a vertical cliff hoist, designed by John Anderson, which was used to transport passengers up and down the steep north-facing cliff between the town and the pier. It improved access for tourists to the seafront and beach. Designed by George Croydon Marks for the manufacturer Richard Tangye, the cliff lift has a height of 120 feet and a track length of 207 feet , resulting 71 per cent incline. A pair of 12-person cars, each fitted with a 240-imperial-gallon water tank, run on parallel standard gauge tracks; by removing or adding the water to their tanks, movement is achieved, regulated by a brakeman at the top.